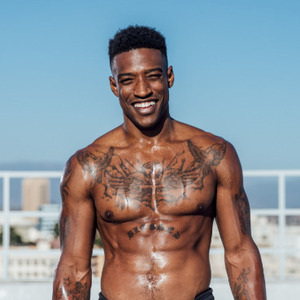 Jacy Cunningham is a trainer, motivational speaker, and founder of The Jacy Method — his unique style of training where working out meets working in.

From a young age, Jacy knew that his passions extended far beyond the playing field. Having grown up in a family of athletes, he felt pressured to always be on top of his game and excel in his performance. His constant effort and determination paid off, and in 2008, he signed a football scholarship to Howard University in Washington, DC.

After playing four years of college football and graduating with an economics degree, he eventually threw in the towel and walked away from football in 2012. For months after leaving the sport, he weaved in and out of states of depression. Without his sports identity, he was left questioning his purpose — until he reconnected with a friend to take part in the Summit Series events in Utah, where he worked as a movement instructor until 2017. His time at the Summit Series served as a launching pad for The Jacy Method, a physical and emotional movement experience that helps people reflect and embrace every part of their being.

Jacy is a certified fitness instructor with the American Aerobic Association International/International Sports Medicine Association and he’s certified with Qoya Yoga. Since the launch of The Jacy Method, he’s worked with clients such as Nike, Life Is Good, and Mike Posner. He continues to travel around the country and help others find healing and connection through movement.