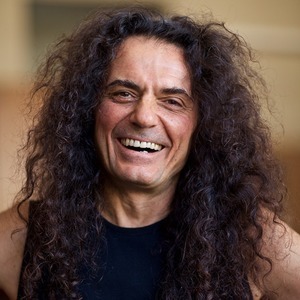 Jose Calarco is a bridge to the spirit world. As the Ceremonial Leader for Forrest Yoga, he creates and teaches ceremonies, tells creation stories from the traditions of the First Peoples of Australia and other shamanic traditions, and weaves these into the yoga practice. Jose brings his passion, playfulness and heartfelt respect for the ceremonial traditions of the First Peoples to every Forrest Yoga event.

A musician and songwriter, Jose uses the language of music to convey messages of the spirit for which there are no words. Jose’s music invites students to attune to the cosmic vibrations all around us, which helps us realize that we are part of that vibration: Jose’s music is an invitation into the feeling of coming home.

With a long and wide-ranging background in the arts in Australia and around the world for the last twenty five years, Jose has covered almost the entire spectrum of experience, from producer and administrator of large-scale events, to innovative artistic direction in the fields of dance, film, theatre, yoga and music.

Jose comes from a long history with shamanism and healing, and brings his decades of experience in musical direction to the Forrest Yoga events. Thanks to his vision, Forrest Yoga is now further enriched by the wisdom of ceremonial elders and master musicians of various cultures from around the planet.

One of the many treasures Jose brings is new teachings from the Dreamtime; stories, songs, and dances, from the Earth’s oldest living culture. Together, Ana and Jose use these ancient teachings and music to set and guide the intent for the yoga asana. This music seeps into places that are untouched by word.

UNLIMITED ACCESS DURING YOUR TRIAL, THEN ONLY $20/MO AFTER