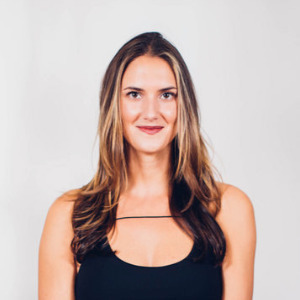 Victoria Batha is a Real Pilates® instructor based in New York City and founder of The Pilates Snob, a brand dedicated to promoting classical Pilates and safe Pilates technique.

Victoria grew up channeling her height and skill into tap dancing, an activity she pursued from ages 5 to 15. Though she wasn’t an athlete in high school, she found that her 5'11" height worked to her advantage when she joined the Division I Rowing Team at Syracuse University. As a rower, she became accustomed to pushing herself in more physically intense workouts. Chronic tendonitis of both knees eventually led her to seek exercise that was friendlier for her joints.

After graduating from college, Victoria moved to Manhattan and discovered Pilates at her neighborhood gym. It eventually became a regular form of exercise that she incorporated into her routine while training for two half-marathons. After suffering from a painful episode of rhabdomyolysis in her elbow, Victoria ditched the kettlebells for good, fully channeled her energy into Pilates, and has never looked back.

She currently teaches at Alycea Ungaro’s Real Pilates studio, where she graduated from the Real Pilates Teacher Training Program in 2016. She is a third-generation instructor in the lineage of Romana Kryzanowska, a protégée of Joseph Pilates. In addition to running The Pilates Snob brand, she is currently working on her master’s degree in applied exercise physiology at Columbia University.